Full Name
Jake Olson
Company
Two Yellow Lines
Job Title
Producer/Production Coordinator/Actor
Speaker Bio
Jake Olson discovered a love for film while managing a movie theater in his small hometown in Minnesota. Raised on 4-H, sports, and the countryside, he was called to California by the mountains and the ocean. Once there, he built a career that combined his love of film and the outdoors. When Zac Titus, a longtime excursion buddy, approached Jake to be part of the Two Yellow Lines production team, it seemed like the perfect next step. Capturing this story of love and redemption against a sprawling Montana landscape with a few of his best friends was one of the best (and most challenging) experiences of his life to date. Jake is proud to have helped capture and develop this idea into a finished film.

Jake is an actor, producer, and photographer based in Venice, California. He’s worked in film & television, notably in Butterfly Caught, The Mentalist, American Horror Story, and Private Practice, as well as multiple national commercial campaigns.
Speaking At
8K Association: The Creative Perspective on 8K 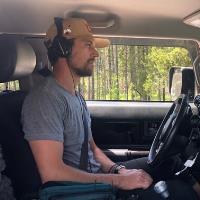