Full Name
Derek Bauer
Company
Two Yellow Lines LLC
Job Title
Writer, Director, Cinematographer
Speaker Bio
Derek Bauer grew up at the base of the North Cascades, in Washington state. At a young age, his father was diagnosed with early onset Alzheimer's, and after a few hard years, he passed. When Derek grew older, he discovered his dad’s love of the mountains and the outdoors. This film is the expression of that relationship. It’s about loss, it’s about abandonment, and most importantly, it’s about the human spirit and its ability to heal.

Derek is an Award-winning cinematographer with over 15 years of professional experience. Notable films include Butterfly Caught, Winning: The Racing Life of Paul Newman, and The 24 Hour War. He shot 40 episodes of the award-winning streaming series, Mr. Student Body President. Additionally, he has worked extensively in the commercial world as both a director and cinematographer. Clients include Ruffles, Audi, Adidas, Nissan, and Universal’s Jurassic World, to name a few.
Speaking At
8K Association: The Creative Perspective on 8K 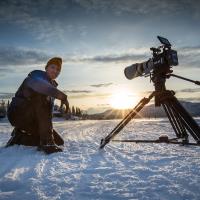