Full Name
Brandie Konopasek
Company
Netflix
Job Title
Original Film Post Production
Speaker Bio
Brandie pursued a path to the Entertainment Industry over 15 years ago, with nothing more than a dream and a few dollars in the bank. In order to navigate her way to a successful career, she has relied on dedication, long hours and a constant network of invaluable peers.

Her introduction to post-production began over a decade ago when she took an opportunity as a PA at EFILM in Los Angeles. It would be this position that would introduce her to the incredible talent put forth by Marvel Studios/Disney, Emmanuel Lubezki, Jon Favreau and many others, all under the guidance of their finishing artist, Steve Scott.

It was during this immersion into post that Brandie developed her technical skill, learning both the physical film medium and the new digital camera platforms simultaneously, under the guidance of Joachim "JZ" Zell. She would then go on to become a part of SMPTE, HPA, and the YEP mentorship program, later serving as the program's Chair of Education.

Taking the knowledge gained for the technical workflows through JZ, as well as training to understand lighting and color artistry via Steve Scott, Brandie made the leap nearly 8 years later over to Netflix.

Within these last few years at Netflix, Brandie has helped guide over 70 feature films to service as part of the Original Independent Films post-production team, and is thrilled to join Storytellers for SMPTE this year.
Speaking At
SMPTE Storytellers: The Importance of a Mentor - A Story by Brandie Konopasek 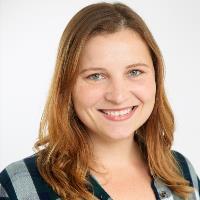