Full Name
Alexander Adolf
Company
Condition-ALPHA
Job Title
Owner & Principal
Speaker Bio
Alexander Adolf is one of the pioneers of digital television in Germany. Back in 1996 he entered the digital TV broadcast scene as he joined BetaResearch, where he participated in the development and commercial launch of DF-1 (later re-branded Premiere, and today operating as Sky Germany), their head-end system, conditional access system, and d-boxTM receiver platform, together forming the first commercial digital Pay-TV service in the German speaking countries. He later moved on to Micronas, where he worked on SoC chip-sets for digital flat-panel TV sets as a senior system architect.
In January 2010, Mr. Adolf decided to become independent and offer his experiences as an independent consultant under the name of Condition-ALPHA. In addition to consulting and professional services in the technology domain for the digital broadcast industry, he also offers consulting and professional services in the area of IT and system security.
Mr Adolf is a member of the Association of German Engineers (VDI), a senior member of the Institute of Electrical and Electronics Engineers (IEEE), and a vice-chair of the DVB Technical Module. He is the main author of various white papers, scientific articles and contributions to standards. 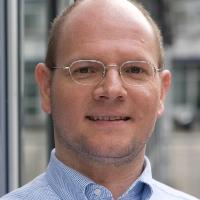